Luciano's turn to get jealous!

SPOILER alert: Don't read if you have not read City of Masks and City of Stars.

Arianna writes: I was in a very delicate situation with the  Duke in Giglia. Bellezza wanted to stay independent and in a sense the di Chimici were are enemy. But Gaetano and Francesca had become friends of mine, once I'd turned down his proposal of marriage to me, and I wanted to be at their wedding. Then Duke Niccolò sent me a ridiculously expensive dress to wear at the ceremony.

Luciano writes: I was in Giglia with Rodolfo, trying to ensure that Arianna would be safe at the weddings. Ironic really, when you think what did happen. But Rodolfo and I had to go to dinner with Duke Niccolò because he wanted to thank our friends Sulien and Sky (both Stravaganti) for saving his life when someone tried to poison him. This is what happened at the dinner:

"‘Tell me,’ said the Duke casually, ‘do you think the young Duchessa would be equally averse to all members of my family?’ Everyone round the table was surprised. Sky thought the Duke might be going to suggest yet another nephew or cousin of his, but all the others knew that the choice of di Chimici suitors would be very limited. The forthcoming weddings would tie up most eligible di Chimici males.
‘I have been thinking,’ continued the Duke, ‘of re- marrying myself. ‘And I think perhaps I erred in sending the Duchessa so young and inexperienced a suitor to court her, fond though I am of Gaetano. It perhaps proves the truth of the saying “Never send a boy to do a man’s job.” What do you think your daughter would say to the suggestion of becoming my Grand Duchess?’
There was silence around the table, but Sky had seen Rodolfo’s eyes move straight to Luciano and the boy was fixed in his place only by the intensity of the message that gaze was sending. Both Rodolfo and Luciano had turned quite pale but it was Brother Sulien who spoke first.

‘Does this mean you are taking the title of Grand Duke, your Grace?’ he said. ‘May we offer our congratulations?’
It was clear that most of his children hadn’t known what the Duke was intending; only Carlo looked less than amazed.
‘I shall make a public announcement of my intention the night before the weddings, at the feast,’ said the Duke. ‘That is, as far as my new title is concerned. I think the time is right to become Grand Duke of Tuschia.’
‘Then we must congratulate your Grace,’ said Rodolfo diplomatically, raising his goblet as if in a toast. ‘As for my daughter, I’m sure she will hear your suit with the honour due to it when she arrives in Giglia.’
.....
For Luciano, the rest of the evening was sheer torment. He couldn’t wait to get out of the palace. In fact, the four Stravaganti left the palace together, after much tedious ceremony, and Gaetano had time only to whisper that he would meet the others at the friary the next day.
Sky knew that Luciano was still being restrained by the silent force of his master’s will until they were well away from the Via Larga. But as soon as that control was relaxed, Luciano exploded.
‘So that was what the dress was all about! And the grand dinner! We’re supposed to be impressed. But I’ll never let Arianna marry that monster. I’ll kill him myself first!’

I certainly felt angry enough to do it then but when the Duke and I did go head to head, it wasn't quite as I had expected. 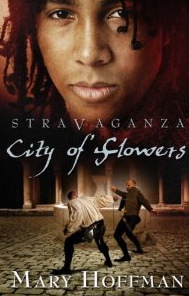 Posted by Luciano and Arianna at 11:01