Luciano writes: We went on meeting in secret in Padavia after the events in City of Secrets, Arianna still dressed as a boy. But now we had another problem hanging over us - the coming sea battle as The Gate People tried to invade Classe.

Ariana writes: Luciano and I have never managed to have a normal relationship! Assassination, war, politics are the background against which we fell in love. It's hard for us to think we could get married like other people.

"One of the best things for Luciano about seeing Arianna in Padavia was that she didn’t have to wear a mask in public. She hadn’t been able to get away from state affairs in Bellezza much this term. When after his morning classes Luciano suddenly saw ‘Adamo’ in the tavern of the Black Horse it was the first time he and Arianna had been together since his trip to Classe. He had to restrict himself to a delighted smile and a masculine arm-clasp while his disguised fiancée grinned back and tried to look like the boy she was dressed as.

She was still guarded by Marco, who was now married to the maid Barbara and was an old friend of the younger couple. He understood that they would want to get back quickly to Luciano’s house and made himself scarce with Alfredo in the kitchen.

‘It’s so good to have you here again,’ said Luciano when the first rapture of their reunion had run its course. ‘I don’t think I can wait till May to come back to you.’
‘Don’t be silly,’ said Arianna reprovingly, propping herself on her elbow. ‘We have a war to fight before then.’
‘All the more reason to get married sooner and be together whatever happens,’ he said.
‘But the Duchessa of Bellezza can’t marry her Duke in a little parish church with a few friends back for bread and cheese afterwards,’ said Arianna.
‘Sounds good to me,’ said Luciano, brushing a loose curl back over her shoulder. ‘I didn’t think you cared about all that stuff anyway – clothes and jewels and pomp and ceremony.’
‘I don’t,’ she said. ‘At least the me that is Arianna doesn’t. But I’m also the ruler of my city-state and the people demand and deserve a good show. That takes time to prepare.’
‘Now you sound like Silvia,’ said Luciano.

Arianna laughed, ‘Well, blood will out, I suppose. And I don’t want Fabrizio di Chimici to think we got married in a hole and corner way – because we were afraid of his plot with the Gate people.’
‘So you’d rather do it in full view in the cathedral of the Maddalena, where any of his assassins could kill me?’ said Luciano. ‘Or both of us.’
‘Don’t joke about it,’ said Arianna seriously, putting her finger on his lips. ‘It is my worst nightmare.’" 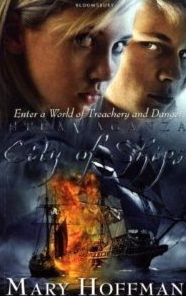 Posted by Luciano and Arianna at 01:01