Is it really going to happen?

Arianna writes: You would think after we had both thought in the battles of Classe - at sea and on land - we might have entered some calmer waters in our own lives. But almost as soon as I got back to Bellezza, we had news of another serious situation in Fortezza. And of course Luciano felt he had to go haring off there to join in with whatever murder and mayhem he could find!

Luciano writes: And Arianna would have done the same but this time we managed to stop her. She was so angry with me and with Rodolfo though! I have never known her so cold and Duchessa-like. But the situation in Fortezza was not only dangerous but very delicate. This is the monent we found out what was going on. You'll be able to read all about it in two days' time - at least in my old country of the UK.

"‘I must get back to Padavia,’ said Luciano. He had already stayed in Bellezza longer than he had meant to and couldn’t really prolong the absence from his stud- ies any longer.
‘Not long now,’ said Arianna.

They were in her private parlour with no one else present but Rigello the African cat. He was snoozing beside the sofa, quite used to the Cavaliere’s presence. He didn’t even open an eye when Luciano embraced his mistress.

‘A month!’ said Luciano. ‘I can’t believe we shall be married in just over four weeks. We seem to have been waiting for ever.’
‘Well, nothing’s going to stop us now,’ said Arianna, smiling.
‘Hush,’ said Luciano. ‘We used to say in my old world “famous last words” whenever someone said anything like that.’
‘I don’t know what that means,’ said Arianna, ‘but I don’t like the sound of it.’

As if on cue, there was a knock on the door, and Rodolfo came in looking very serious." 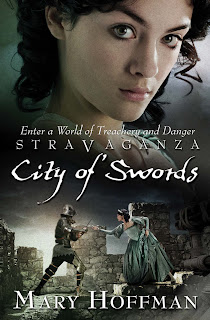 Stravaganza: City of Swords is published by Bloomsbury in the UK on 5th July 2012 and in the US on 21st August 2012. So the six book Stravaganza sequence reaches its gripping climax.

Posted by Luciano and Arianna at 01:01